Calling out the Fetterman cult 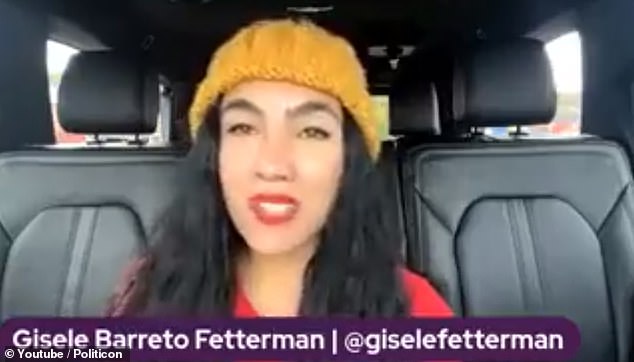 Gisele Fetterman may be an illegal alien from Brazil but she knows how the system works.

National Review reported, "One of the points of contention Tuesday night during a debate between her husband and Republican candidate Dr. Mehmet Oz was how many mansions each man has and how they had afforded them.

"Gisele Fetterman’s comments were an attempt to contextualize why she and her husband own a mansion that Oz alleged Fetterman had received for a dollar."

So what did she say?

She said, "And while we did not want the mansion, that mansion came with a pool I wanted. And the dream was to make this a public pool and turn it into the people’s pool and ensure that young people across Pennsylvania could learn how to swim and water safety and kind of work to right some of the wrongs."

What are those wrongs?

She said, "Historically, swimming in America is very racist."

So buying a mansion for $1 was her way of fighting racism. And if you believe such a deal reeked of skirting tax laws you are a racist because she needed that pool "to right some of the wrongs."

Yes, America is so terribly racist that Gisele broke our laws to get here and live the rest of her life in a mansion.

But living in that mansion she says she didn't want is the price she must pay to bring swimming equity to our great nation. She's a Mother Teresa as in Teresa Heinz Kerry.

Giving Gisele a pass on her swimming-is-racist remark is typical of coverage of Fetterman.

Salena Zito gives no one a pass. She has had it. In light of the debate, she unloaded on the media and the Democrat Party for covering up Fetterman's inability to think.

Zito wrote, "Many of those watching had no idea how bad Fetterman's health was, causing disbelief that no one had reported this sooner. And many were angry that Democrats and reporters knew all about it and said nothing.

"The one reporter who did mention Fetterman's inability to converse — NBC news reporter Dasha Burns — was viciously attacked for her dispassionate reporting, not just from Fetterman's campaign and supporters but also by blue-check journalists on Twitter and her own NBC News colleague Savannah Guthrie.

"Unfortunately, the accurate story about Fetterman instead became a false story about Burns and even an attempt to destroy her career. This included a veiled threat from Fetterman's wife, who used her large platform to demand an apology from Burns while threatening consequences for her reporting. One has to wonder what those consequences could have been."

Telling the truth can get you in trouble in a fascist state where one party controls the media and the government.

After bashing the media for its silence, Zito lit into Democrats.

She wrote, "Sen. Bob Casey, for example, his state party’s elder statesman, has paraded on the stage with Fetterman for weeks now, knowing full well how ill he is. After the debate, he had the audacity to go on national television and say with a straight face, 'I think John Fetterman did really well.'

"In the minutes and hours after the debate, Twitter's reaction was very different from the voters' reaction in the state. Blue-check journalists, pundits, and Democrats were doing some serious contortions to tweet that there was nothing to see there — Fetterman was fine, and Republicans are bad. The Philadelphia Inquirer even credited Fetterman with winning the debate.

"Many of these same people have previously described Trump supporters as being part of a cult. But nothing is more cultish than to proclaim that nothing is wrong when clearly everything is wrong."

John Nolte went further, writing, "Forget the politics. On a human level, watching what the Democrat Party, the Fetterman campaign, and John Fetterman’s wife allowed to happen at Tuesday night’s U.S. Senate debate was like watching someone bully a disabled child.

"This poor man is obviously in no shape to serve in any political office, much less the U.S. Senate.

"Even more, you do not have to be a licensed medical practitioner to know these mercenary monsters are risking John Fetterman’s long-term health prospects and his chance at a full recovery.

"Stroke victims require rest and rehabilitation. This is especially true for stroke victims dealing with cognitive issues. Fetterman’s problems are not just physical and speech-related. His brain is scrambled. The only way to fix that is through intense and focused rehabilitation."

Fetterman has no one on his side. No one is protecting him. He does not have anyone in his corner throwing in the towel to protect him from further damage.

For you see, like Jill Biden, Gisele Fetterman uses her husband to gain power. She plays the American political game well. Questioning her husband's ability to understand simple conversation is "ableist." Swimming is racist.

She says these loony things knowing she does not have to make sense. All she has to do is give her supporters a moral cause. Living in a mansion is her way of fighting racism.

But what she is doing is evil because she is profiting from someone else's pain -- a person she once professed to love.

My weekly column on Substack will be published on Saturday at noon Eastern.

Either sign up for a free subscription or visit the site after noon on Saturday because there is no paywall.

There is no censorship, either.