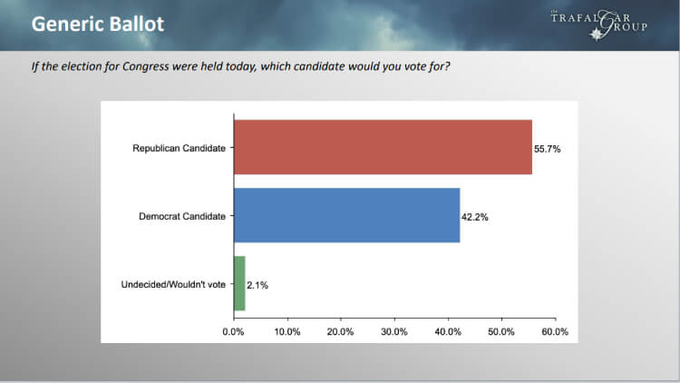 The Trafalgar Group is very accurate in its polling. It found 55.7% of voters prefer a Republican candidate in the upcoming congressional races. 42.2% prefer a Democrat.

Let me put that in perspective.

Remember the 2010 congressional races when the Tea Party flipped 63 seats for Republicans, which gave them their largest majority in decades?

Steve Bannon was not talking out of his hat when he said Republicans could flip 100 seats this year.

The Real Clear Politics average of polls put the gap at 4.1 points.

This could have staying power because Gallup reported there is a 5-point gap in favor of Republicans in how people identify themselves. A year ago, Democrats had a 9-point advantage.

That was a 14-point swing in one year.

We all know the reason. Biden. He has had the worst first year of a presidency since William Harrison died a month after his inauguration in 1841. He too had a goofball vice president named John Tyler.

Biden surrendered Afghanistan and left $80 billion worth of military equipment -- and thousands of Americans -- behind. Biden adopted inflation as his economic policy, which helps the rich as the stock market soars but hurts the poor as wages cannot keep up. And Biden blew covid. More people died under him than under Trump -- and Trump had no vaccines for most of his presidency.

This is Herbert Hoover II.