Tim Scott: "Woke supremacy is as bad as white supremacy." 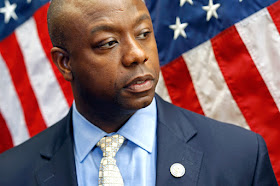 The left reached Peak Wokeness on Monday when the New York Times got Pepé Le Pew fired from an upcoming Space Jam movie. That Le Pew is a cartoon character did not spare him any more than it spared Dumbo and Peter Pan from being placed on the adult content section of Disney+.

Australia's ABC reported, "Dove soap maker Unilever will remove the word normal from its beauty and personal care products, as well as stop digitally altering images of models used in its advertising, in a push to be more inclusive.

"The move from the London-based company, which is one of the top advertisers in the world, comes as it tries to move beyond the backlash it has faced for some of its advertising campaigns."

The voracious appetite of the mob seems to cancel something new on a daily basis.

Robby Soave, writing about last week's cancellation of 6 Dr. Seuss books, said, "Disappearing books from library shelves gets us closer to the classic example of censorship, though of course a physical library possesses a finite amount of space and thus has to consider certain priorities. What's happening to Dr. Seuss is the result of a very specific kind of prioritization, however: One decided upon not by readers or the public at large, but by activist educators peddling a false narrative about the beloved child author's books and characters.

"This narrative—the result of a highly misleading 2019 report on 'Orientalism, anti-blackness, and white supremacy in Dr. Seuss's children's books'—has quickly become influential, motivating much of the recent shift away from Seuss among certain government officials, educators, libraries, and even private publishers. Learning for Justice, an outgrowth of the undeservedly well-regarded Southern Poverty Law Center, cited the report as evidence that it had misjudged The Sneetches, a Seuss story about a group of birds—some with stars on their bellies, some without—who eventually come to realize that their superficial physical differences don't matter at all."

He suffers from believing that the elitists pushing this nonsense want equality or any of their stated goals. No, no, no. The elitists want to divide us by race, by sex, by type of sex we have, by religion, and by any other means necessary.

Conservatives know this is wrong. We seem helpless to stop them.

Enter the junior senator from South Carolina. After Joy Reid of MSNBC called him a prop, Senator Tim Scott went on Fox to declare, "Woke supremacy is as bad as white supremacy. We need to take that seriously."

He articulated what many of us were thinking. Declaring one group superior to others is indeed a bigotry. Empowering that endangers a society.

As for Reid, Scott said, "when she calls a United States Senator who's a subject matter expert a prop, a token, or a superficial covering, that's personal and that's wrong and she should be held to account."

In 8 words, Senator Scott has enabled those bullied by the mob to fight back: "Woke supremacy is as bad as white supremacy."

Make no mistake. I do not care about a cartoon skunk, Dr. Seuss, or what they call a soap in Australia. That is for small-minded people. But I do care about allowing a small band of well-financed bullies to determine what is acceptable and what is not acceptable in society.

At 55, Scott is in the sweet spot for the presidency.