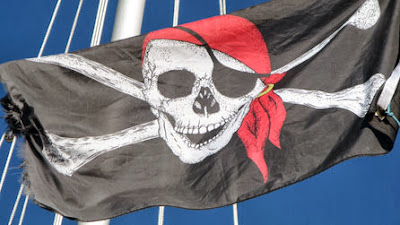 For more than a year, the New York Times promoted the Lincoln Project as a brave group of Republicans who opposed a president who had the support of 96% of Republicans.

With the election and the Donald Trump presidency over, the Times today turned on the Lincoln Project, portraying them as the grifters. Trump supporters saw that all along.

In a 4,000-word, triple-bylined story, the Times finally examined an organization it promoted.

Under the headline, "We Are Republicans, and We Want Trump Defeated," the grifters said, "We look to Lincoln as our guide and inspiration. He understood the necessity of not just saving the Union, but also of knitting the nation back together spiritually as well as politically. But those wounds can be bound up only once the threat has been defeated. So, too, will our country have to knit itself back together after the scourge of Trumpism has been overcome."

The Times illustrated the piece with an engraving depicting the assassination of Philip Barton Key by Dan Sickles in Lafayette Square across from the White House in 1859. The Times showed all the subtlety of a stampede of elephants. 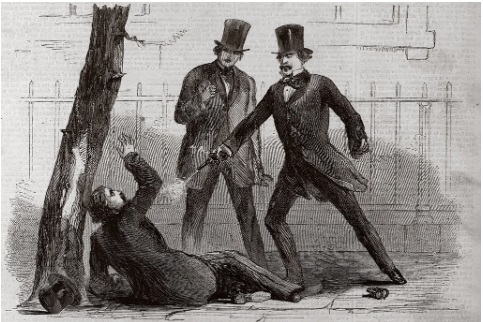 (Key had an affair with the wife of Congressman Sickles, who used the temporary insanity plea and was acquitted. He lived to age 95, dying 55 years after he murdered Key.)

5 days after posting the piece, the Times ran a pack of letters under the subheadline, "Readers across the political spectrum praise an Op-Ed by four conservatives who are mounting a campaign against Trumpism."

A year of flattery followed.

Today, the Times turned on the Lincoln Project. Well, the Ochs-Sulzberger family that has run the newspaper for more than a century did sympathize with the Confederacy.

The Times ran a story, "Inside the Lincoln Project’s Secrets, Side Deals and Scandals.

"A civil war broke out in the group as it antagonized Donald Trump, with leaders splintering over financial arrangements and revelations of online harassment by a top official."

The story began, "A few days before the presidential election, the leadership of the anti-Trump Lincoln Project gathered at the Utah home of Steve Schmidt, one of the group’s co-founders, and listened as he plotted out the organization’s future.

"None of the dissident Republican consultants who created the Lincoln Project a year earlier had imagined how wildly successful it would be, pulling in more than $87 million in donations and producing scores of viral videos that doubled as a psy-ops campaign intended to drive President Donald J. Trump to distraction. Confident that a Biden administration was on the horizon, Mr. Schmidt, a swaggering former political adviser to John McCain and Arnold Schwarzenegger, pitched the other attendees on his post-Trump vision for the project over a breakfast of bagels and muffins. And it was ambitious."

They had hit the jackpot.

Schmidt told everyone, "Five years from now, there will be a dozen billion-dollar media companies that don’t exist today. I would like to build one, and would invite all of you to be part of that."

That Schmidt. He always has another scam to unfold.

The four of them were in it for the money (and one of them for the men he could groom for sexual exploitation).

The Times reported, "The behind-the-scenes moves by the four original founders showed that whatever their political goals, they were also privately taking steps to make money from the earliest stages, and wanted to limit the number of people who would share in the spoils. Over time, the Lincoln Project directed about $27 million — nearly a third of its total fund-raising — to Mr. Galen’s consulting firm, from which the four men were paid, according to people familiar with the arrangement."

Not a bad haul.

The Times reported, "Initially, the project operated much like a pirate ship. Typical workplace management practices were lacking. The organization has no chief executive. Two of its largest contractors, who were billing the Lincoln Project, were given seats on the three-member board of directors, a breach of normal governance practices.

"The executive structure was malleable: The two contractors on the board, for instance, Ron Steslow and Mike Madrid, who were each involved in reaching voters through digital advertising and data targeting, were also referred to as co-founders. So were Mr. Conway and Jennifer Horn, a former head of the Republican Party in New Hampshire who joined early on and played a leading role in outreach to independents and Republicans."

The money was rolling in like a scene from Goodfellas.

What was the problem? They collected donations, put out a few cheap online video ads, and split a third of the money.

Conway apparently was not in on the deal, though.

He told the Times, "This thing was literally a pop-up stand. It was an organization that got big really fast, and more money came in than anyone could have imagined. It was just catch as catch can."

He left the project last summer without blowing the whistle on what the Times called a pirate ship.

The Times reported, "If liberals viewed the Lincoln Project’s mission as noble, the four Republicans who started it had long been practitioners of bare-knuckled political brawling."

Oh, there is a surprise. Schmidt and company are so foul-mouthed, they could be on The View.

But with President Trump out of the White House, there was no reason for a Lincoln Project. Their grandiose post-election plans fizzled.

The Times said, "Not long after the election, with relationships fraying over the group’s finances, Mr. Schmidt and Mr. Wilson sought to formalize their control of the project by pushing to join the board of directors, multiple people with knowledge of the effort said. Mr. Steslow and Mr. Madrid were sent a resolution to sign that would add Mr. Schmidt and Mr. Wilson to the board. Mr. Steslow and Mr. Madrid instead requested a meeting to discuss the proposal. They were rebuffed.

"A bitter standoff began. With Mr. Steslow and Mr. Madrid still in control of the board, Mr. Galen, aligned with Mr. Schmidt and Mr. Wilson, set up a new entity of their own called Lincoln Project 2024. In December, they moved millions of dollars from the existing Lincoln Project into companies they controlled, which would have left behind a hollowed-out shell, several people with knowledge of the dispute said. (Mr. Galen said, 'Anything regarding this, I can’t speak to.')

"Mr. Steslow and Mr. Madrid, threatened with litigation by the original founders, asked to review the organization’s books, as well as information related to Mr. Galen’s consulting firm."

They banded together for a single purpose: To profit from bad-mouthing Donald Trump.

Now he's gone and the money no longer rolls in so they are bad-mouthing one another.

And the New York Times is only too happy to chronicle it.