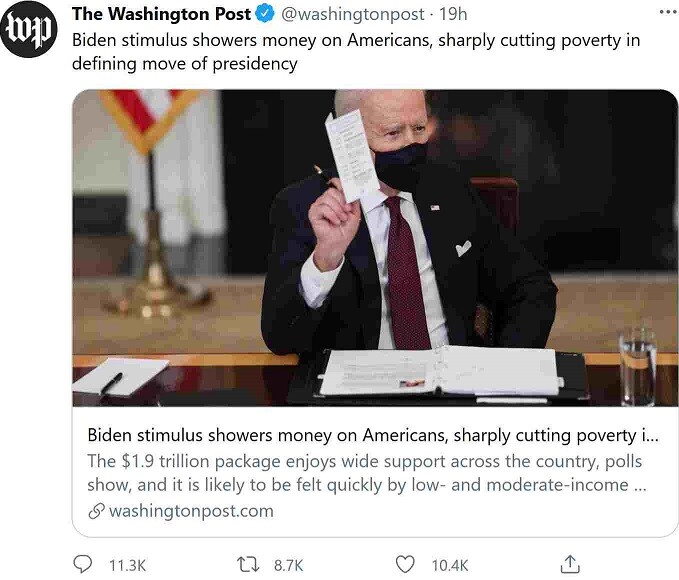 The Washington Post declared poverty is over, comrade! Chairman Xiden killed it.

ITEM 1: The Washington Post reported, "President Biden’s stimulus package, which passed the Senate on Saturday, represents one of the most generous expansions of aid to the poor in recent history, while also showering thousands or, in some cases, tens of thousands of dollars on Americans families navigating the coronavirus pandemic.

"The roughly $1.9 trillion American Rescue Plan, which only Democrats supported, spends most of the money on low-income and middle-class Americans and state and local governments, with very little funding going toward companies. The plan is one of the largest federal responses to a downturn Congress has enacted and economists estimate it will boost growth this year to the highest level in decades and reduce the number of Americans living in poverty by a third."

Reduces poverty by a third!

But that was under Donald Trump. He lacks Biden's magic, which turns $1,400 into a miracle cure for poverty.

She said, "In terms of the bonus that corporate America received versus the crumbs that they are giving to workers to kind of put the schmooze on is so pathetic."

Gee, I wonder why so many government employees vote Democrat.

Those $1,400 stimulus checks are worth 2,641,509,430 Venezuelan bolivars. We are all going to be Venezuelan billionaires. Just keep printing the money, Democrats.

The problem is not the stimulus checks per se. They represent 9% of this $1.9 trillion giveaway. It is all the bailouts of state and local governments that are ginning up inflation. States killed their local economies and are now rewarded for ending the middle class. It will not be long before the government is half the U.S. economy.

Do your really expect Biden or Harris to do better than Maduro in Venezuela?

Remember, it was not that long ago that Venezuela was the most prosperous and best educated country in Latin America.

ITEM 5: The Portland Police reported, "An arson fire that damaged vehicles parked at the administration building of Portland Public Schools is under investigation.

"On Saturday, March 6, 2021 at 3:15 a.m. Portland Fire and Rescue responded to a fire alarm at the Portland Public School Administration Building at 501 North Dixon Street. They encountered three PPS vehicles on fire in a parking garage. Two were cargo vans and one was a large box truck. They extinguished the flames.

"The fire was determined to be suspicious in nature and fire investigators from PF&R responded. Preliminary information is that the suspect or suspects gained entry to a fenced area on the property, started the fires, and vandalized the building."

ITEM 6: New York magazine reported, "New York State Senate majority leader Andrea Stewart-Cousins said that if one more woman accused Governor Cuomo of misconduct, she would call for him to resign, as other state lawmakers already had following allegations that Cuomo had sexually harassed at least three women (and reports that his administration had tried to hide the number of nursing-home residents who died from covid 19 in the first several months of the pandemic)."

She told a TV station, "Any further people coming forward, I would think it would be time for him to resign"

There were 3 accusers at the time.

"Ana Liss, 35, previously served as Cuomo's policy and operations aide between 2013 and 2015. She told the Wall Street Journal on Saturday that during her time in his administration, the governor had subjected her to unsolicited advances.

"Liss claims it included asking her if she had a boyfriend, touching her on the lower back during an event reception and kissing her on the hand.

"Also on Saturday, Karen Hinton, 62, spoke to the Washington Post about an incident in which Cuomo summoned her to his 'dimly lit' hotel room and embraced her after a work event in 2000."

In response, Andrea Stewart-Cousins called for Cuomo to quit.

So governors, remember, you can harass only 3 women. After that, you must resign.

But why are we empowering women like this? Why is an accusation of hitting on a woman enough to undo the will of the people? If women are so strong and able, why can't they just tell the guy to shove off?

I have a feeling they already do.

Impeach him for his role in killing 15,000 people in nursing homes, but not this junk. This is not Victorian England.

ITEM 7: Of course, the governor could enter a Pepé Le Pew plea, which holds that a cartoon skunk's unwanted advances on a cat taught him it was OK to harass women.

There also is the Yogi Bear defense for stealing picnic baskets.

My favorite is the Elmer Fudd plea for poaching. You just tell the judge you didn't know if it was Duck Theathon or Wabbit Theathon.

ITEM 8: Just the News reported, "President Joe Biden's nominee to fill a top Pentagon post is under fire from Republicans for a history of uncertain support for the top U.S. ally in the Middle East, support for the Iran nuclear deal and — much like failed OMB director nominee Neera Tanden — a trail of caustic partisan swipes on social media.

"Colin Kahl, nominated for undersecretary of defense for policy at the Department of Defense, faced tough questioning Thursday at his confirmation hearing before the Senate Armed Services Committee from Republicans openly opposing or harboring serious doubts about his nomination
"With credentials burnished in key positions in the Obama-Biden national security orbit, Kahl was a natural for the DOD undersecretary for policy post under Biden. During the Obama years, he served first as deputy assistant secretary of defense for the Middle East, then as Vice President Biden's national security adviser. But for Republicans who see him as a tart-tongued hyperpartisan in the Tanden mold, Kahl brings a lot of baggage with him."
Tanden.
Now Kahl.
The message to reporters and government workers is clear: Lay off Twitter or risk employment.
And once Twitter loses reporters and government workers, it is dead because no one else with a job gets paid to goof off all day on Twitter.
ITEM 9: Ryan Saavedra reported, "Senate Democrats blocked an amendment by Republicans on Saturday that would have stopped taxpayer-funded stimulus checks from going to illegal aliens and incarcerated criminals.
"Republican Sens. Tom Cotton (AR), Ted Cruz (TX), and Bill Cassidy (LA) offered an amendment on the Senate floor to block prisoners from being able to receive stimulus checks, which was blocked in a 49-50 vote."
Illegal aliens and inmates are the core constituency of the Democrat Party, which stands for lawlessness and disorder.
ITEM 10: The Guardian reported, "Switzerland will follow France, Belgium and Austria after narrowly voting in a referendum to ban women from wearing the burqa or niqab in public spaces.
"Just over 51% of Swiss voters cast their ballots in favor of the initiative to ban people from covering their face completely on the street, in shops and restaurants."
There is just one little problem.
The story said, "Face coverings worn for health and safety reasons are also exempt from the ban, meaning face masks worn because of the Covid-19 pandemic will not be affected by the new law."
It is another feel-good referendum that does nothing in the end.
ITEM 11: AWR Hawkins reported, "Democrats Need a ‘Yes’ Vote on Gun Control from Joe Manchin."
There go your gun rights.
ITEM 12: NBC reported, "About 100 demonstrators burned masks outside Idaho's Capitol in Boise on Saturday as a statement against pandemic restrictions, according to authorities and people who tweeted from the scene.
"No one was arrested, and organizers had permits, but the rally was under review because a fire was started, Idaho State Police said in a statement."
I love how the press goes ballistic whenever someone holds an actual peaceful protest.
The story said, "Video and photos showed children present and even participating."
The press celebrates having men in drag read library books to children but hyperventilates over this. If 3-year-old Kamala Harris can say "fweedom" at a rally in Oakland, 10-year-olds can burn a mask under adult supervision.
ITEM 13: The Epoch Times reported, "Sen. Marsha Blackburn (R-Tenn.) is questioning the National Basketball Association’s reported new deal with Chinese state television, the latest official to raise concerns over the league’s relationship with the Chinese regime.
"The NBA famously drew the wrath of the Chinese communist regime in late 2019 after then-Houston Rockets General Manager Daryl Morey tweeted in support of the pro-democracy protesters in Hong Kong. Chinese businesses cut ties with the league, and state broadcaster CCTV stopped airing games.
"But Chinese media recently reported that CCTV will resume regular broadcast of the NBA starting with the All-Star Game on March 7."
The deal will enable broadcasts of games to the slaves who make LeBron James' shoes.
Will LBJ pay them reparations?
ITEM 14: Zero Hedge reported, "The Urban Dictionary, which allows users to submit virtually any phrase with any definition, has removed a reference to Blue Anon - a new phrase mocking leftists for their belief in right-wing conspiracy theories, 'such as the Russia Hoax, Jussie Smollett hoax, Ukraine hoax, Covington Kids hoax, and Brett Kavanaugh hoax.'
"The move comes just 24 hours after journalist Jack Posobiec pointed out the Blue Anon entry to his more than 1 million Twitter followers:"
Never in my life did I imagine conservative as the Anti-Establishment underground, but here we are, and in my quiet way I am enjoying it.
ITEM 15: Law Enforcement reported, " Police in Washington, D.C. arrested a 12-year-old boy Friday who with another male is suspected of going on a carjacking spree, targeting four cars in one hour before police apprehended him, according to NBC News.
"The other suspect remains at large.
"One of the suspects pulled a gun on each victim and demanded they exit the car, according to the Metropolitan Police Department. The first attempted carjacking occurred at 6:29 p.m., but the victim fled the scene."
12 years old.
Will he make it to 18?
If they keep him in custody until then, he has a chance.

" 'Corporate America’s lunge into ‘wokeness’ and cancel culture might hit a bump in the road given public reaction to Disney’s recent actions,' pollster Neil Newhouse of Public Opinion Strategies concluded, assessing data from a recent survey conducted Feb. 26 to Mar. 3.

"Among other recent Disney news, participants of all stripes — Republicans, Democrats, and Independents — were asked questions concerning Disney’s ties to China, the company’s threat to abandon doing work in Georgia over pro-life legislation, and the recent firing of Carano over an allegedly offensive social media post. Notably, participants were shown the social media post in question from Carano, and overwhelmingly thought the firing was unjustified — 72%-28%."

By the way, the largest individual shareholders are the Murdoch family from its sale of most of Fox to Disney. They still own Fox News.