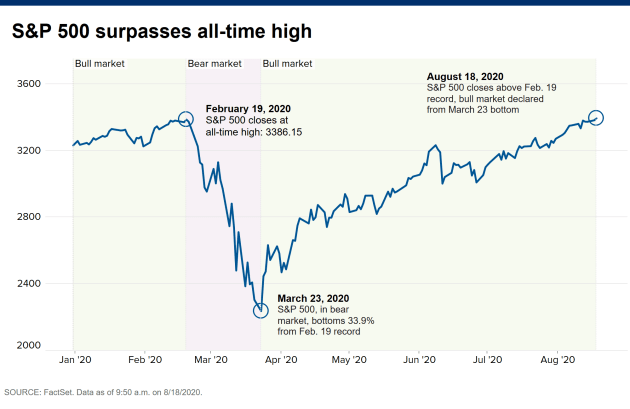 The Dow Jones Industrial Average fell 650 points on Monday because (spins wheel of misfortune) "new data showed a jump in covid 19 cases in both the U.S. and Europe."
Well, that's as good an excuse as any.
If Jill Biden thinks this will help her brain-dead hubby get elected president, she has another thing coming because supporters of President Donald John Trump have been through the drill before.
Stocks plunged 34% (as measured by the S&P 500) from February 19 to March 23.
Then came the best 100 days in stock history.
On August 18, the S&P 500 topped its record close on February 19 and I recovered everything I "lost" during the pandemic panic. All my money is in Vanguard's S&P 500 Index fund.
I did not lose a dime because I don't panic when the market goes down. I ride it out. I am an investor, not a trader.
The pros know we know we have a good thing going with Donald Trump.
Mini Mike's news service, Bloomberg, reported, "With the final stretch of the election upon us, it’s still nearly impossible to guess how the stock market will react to next week’s vote. One estimate from JPMorgan Chase & Co.’s chief equity strategist puts U.S. stocks in for a double-digit advance if Donald Trump keeps his office.
"A victory for the Republican candidate could push the S&P 500 to as high as 3,900 at year-end under the most optimistic case laid out by Dubravko Lakos-Bujas, the bank’s chief U.S. equity strategist. The figure, some 300 points above his base-case target for year-end, implies a 12.5% advance from the gauge’s Friday close. While a number of traders have come to consider a Democratic sweep followed by a prompt fiscal deal among bullish scenarios for the equity market, Lakos-Bujas disagrees, seeing Trump’s victory as the most favorable outcome."
3,900?
That would be a 19% gain in the S&P 500 means Grandpa Surber is closer to that Bentley convertible he wants.

The stock market is doing so well that CBS reported, "Donald Trump has 87% chance of winning the election, stock market researcher says."
The story said, "The research, going back to George Washington, found 16 times in U.S. history when an incumbent president ran for reelection and the stock market was up more than 20% in the preceding three years. In 14 of those 16 times, the incumbent won reelection, giving a success rate of 87%. If the trend holds, Mr. Trump could be No. 15."
The story said stocks are up 32% in the last 3 years.
Overall, the S&P 500 is up 58% since we elected him.
A year ago, before there was any covid 19, I said a recession would not stop President Trump because he had worked to give America its best economy in 50 years.
That was true then. That is true now.
Don Surber at 10/27/2020 03:00:00 PM
Share