Today in Get Woke, Go Broke 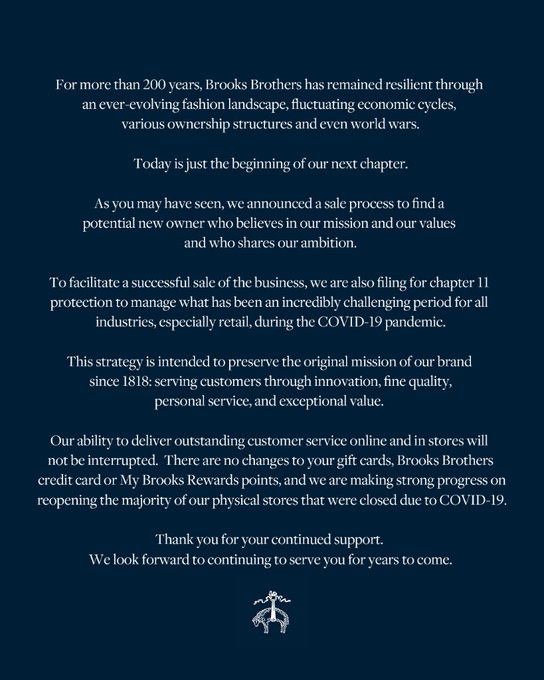 After 202 years of making fine men's clothing -- and 18 days after its Juneteenth wokeness to the fact American slavery was bad -- Brooks Brothers ran to bankruptcy court today seeking a buyer.

The company blames covid 19 for its woes, but the reality is it has had foreign ownership for decades, and they have moved production overseas where labor and environmental regulations are lax. The final 700 American factory workers were told in March that they would be laid off on June 20.

The day before its Italian owner, Claudio Del Vecchio, pulled the plug on his three American factories, the company issued a statement to its associates, including the soon-to-be-fired ones.

It said, "In our last note, we addressed you during a very painful moment for the United States. It is important that we are clear in our condemnation of hatred, racial bias, and inequality of any kind and share support resources available to you. But we know that statements are not enough. George Floyd’s murder by Minneapolis police and the killings of countless other Black men and women have made it clear that there are systemic issues within many institutions that need to be eradicated in the fight for racial equality.

"The current protests in cities across the U.S. are the cumulative effect of hundreds of years of oppression. The importance of this day is not lost on us. Juneteenth, an official holiday in 46 states, commemorates the end of 246 years of slavery on American land. On June 19, 1865, General Gordon Granger read the federal orders freeing enslaved people in Galveston, Texas, nearly two and a half years after the Emancipation Proclamation. All these years later, countless Black Americans — our neighbors, our colleagues, our families and friends — continue to be victims of individual and systemic racism, discrimination and injustice. It is due to this reality that we applaud and support those who are uniting to end the violence and working toward structural reform. Though we may have had stores damaged, make no mistake: glass and inventory can be replaced, lives cannot.

"We realize that our company’s 200-year history is intertwined with that of the United States. While we have yet to uncover confirming documentation of the company’s role, we continuously examine our extensive archives and consult with historians on the subject. We are committed to this ongoing research. If the company benefited in any way from this oppression, we wholeheartedly apologize and we firmly state that it would be entirely contrary to our beliefs today. We are committed to dismantling any shred of systemic racism within our company and creating an inclusive culture for all of our associates, and customers.

"As the country looks inward, so must we. We cannot look at the world and say it needs to change, and not look within ourselves with that same lens. This has been an incredible time for learning and growth for the country and in that spirit, we have spent the last two weeks listening and discussing how we address these important topics as an organization.

"Our values at Brooks Brothers align with and our morals support the objectives of the Black Lives Matter movement. Now, we must collectively use this moment as a catalyst for change and recommit to placing equity, justice, inclusion, and belonging at the center of who we are as an organization. Despite the challenging business conditions, we ask every associate across the company to join us in supporting and prioritizing these conversations in ways that we haven’t in the past. We must be committed to ensuring environments that are anti-racist for both our associates, our customers and for our communities. Racial injustice, prejudice and hate in all its forms, will never have a place in any of our offices, facilities or stores."

Unless you want to move to Italy or Red China or wherever slave labor and sweatshops can be found, without those pesky rules about protecting the air and water.

Brooks Brothers has a history of using slave labor in the United States. It was the original FUBU, using slaves to make clothing for slaves, from cotton picked by slaves.

Del Vecchio told The New York Times in March, "There are a very small percentage of our customers who told us they really care about Made in America. The vast majority of customers care more about quality and service than where a product is made. When we look at the sales, we really don’t see a lot of reason to believe we would be penalized. I think we — I — am more sorry about closing the factories than the customers will be."

Let them eat Chinese. Korean. Indian. Whatever, so long as it is not an American cheeseburger.

Companies close all the time, but what gets me is this punk Del Vecchio claiming our country has systemic racism. He lies. Black people have better opportunities in America than any other place on Earth. We are the most racially diverse people on the planet.

While the phrase -- coined by Instapundit himself -- is get woke, go broke, I believe in many cases the company is already zooming down the tubes and decides to virtue signal on the way out.