What Trump learned from Watergate 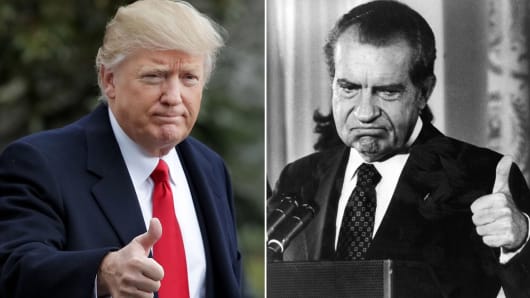 Geoff Shepard graduated from Harvard Law School and spent five years on Nixon’s White House staff, including being deputy counsel on his Watergate defense team. He went on to become a successful Philadelphia lawyer. In retirement, he has gone back to research Watergate. The archives have revealed that Nixon was railroaded.

In American Spectator, Shepard wrote, "There is documented proof of a series of secret meetings between Chief Judge John Sirica and Watergate prosecutors. I don’t know which is the bigger surprise: that they were secretly meeting to resolve issues in advance of trial or that they were documenting their agreements in memos to their files. The mother lode of these documents, improperly removed in 1974 when Jaworski left office, first came to light in 2013 in response to my FOIA requests.

"At one point, Cox became so worried about the sustainability of Judge Sirica’s one-sided rulings in favor of the prosecutors that he feared their conviction verdicts would be overturned on appeal. He secretly approached Chief Appellate Judge David Bazelon to explain how the judicial panels could be stacked to maintain Bazelon’s slim one-vote liberal majority. Sure enough, each of the 12 appeals from Sirica’s criminal trials was heard by the full nine-judge appellate court, sitting en banc — a circumstance unprecedented in any federal appellate court anywhere in the country, before or since."

Shepard wrote, "It should have come as no surprise that Cox delegated the Watergate Special Prosecution Force recruiting to James Vorenberg, a fellow law professor who had taught criminal law. Vorenberg hired only people whom he knew or who were recommended by people he knew, and he assembled a specially selected team of some 70 lawyers, virtually all Ivy League graduates, the top 17 of whom had worked together in the Kennedy/Johnson Department of Justice. Readers should note the constitutional inversion here: these were the very people voted out of office with Nixon’s 1968 election, now in control of the government’s investigative and prosecutorial powers. Vorenberg announced at their first press conference in June 1973 their intent to investigate each and every allegation of wrongdoing by the Nixon administration since it had assumed office some five years prior."

That is why this will not happen again, or at least not to President Donald John Trump. He learned the lesson of Watergate.

We said of Sarah Palin, we cannot spare her; she fights. Donald Trump does not simply fight; he wins.

He was in his 20s when he beat the deep state the first time. Nixon's HUD sued him in its administrative court, hoping to coerce an admission of guilt. Trump's lawyer -- the commie-beating Roy Cohn -- advised him to take HUD to real court. 2 years later, the charges were dropped.

45 years later, Newsweek was still butt hurt over it, reporting, "In 1973 — a decade after the Civil Rights Act, and five years after the Fair Housing Act — the Department of Justice sued Trump Management for its discriminatory practices, which activist groups had meticulously recorded for years, according to the New York Times. Trump and his father, who were both named as defendants, responded by accusing the Department of Justice of defamation, and filing a $100 million countersuit. The messy legal battle ended with the Trumps signing a consent decree, an agreement that allows both parties to end a dispute without admitting fault."

By messy legal battle, Newsweek meant HUD could not prove its accusations.

President Trump learned from President Nixon's mishandling of the press.

On Sunday, Nicholas Kristof of the Carlos Slim New York Times wrote, "After the Watergate break-in, there was no immediate epiphany about its seriousness. Nixon was re-elected that fall by a huge margin. A year later, more Americans said they were more concerned by Chappaquiddick (where a young woman in Edward Kennedy’s car drowned) than by Watergate. It wasn’t until just before Nixon’s resignation that a majority favored his removal from office."

The public was correct the first time. Ted Kennedy drove drunk over a bridge, swam to safety, and left a woman to die. His family's money kept him out of prison. Nixon's team had bungled an attempt to bug the DNC chairman's phone.

But after a year of propaganda by the media and Democrats, the public fell for the Democrat lies. Kennedy somehow became the victim. And he never had to give up drunk driving. Always bear in mind, the Germans were the best-educated people in the world when they fell for Nazism.

President Trump has undercut the power of the press by using social media and the like to get his message out unfiltered. After Donald Trump whupped him and Hillary in 2016, Obama labeled social media Fake News. President Trump then took that phrase and applied it to the anti-Trump media on TV and in the newspapers. (Yes, they still make those.)

Donald Trump prepared for impeachment all along. He kept his nose clean and gave Democrats plenty of room to hang themselves with the Mueller Report. And they did. They had one shot at President Trump and Russian collusion was the shot they decided to take.

President Trump learned from Nixon's firing of Cox, which created a backlash. He kept Mueller, which avoided an obstruction of justice claim.

The president has needled and ridiculed the hapless Democrats, but he also has given them everything they asked for. When they objected to his July 25 phone call to Ukraine, President Trump released the transcript. There will be no nonsense about the cover-up being worse than the crime on his watch.

That transcript should have ended the controversy, but Adam Schiff is insane, Jerry Nadler is a fool, and the press is corrupt. Down the rabbit hole of impeachment they dove.

Public sentiment, the law, and the facts are in President Donald John Trump's favor. He learned from Nixon. it is not paranoia when they really are out to kill you.
Don Surber at 12/17/2019 10:00:00 AM
Share