ITEM 1: The media is mourning Bag Daddy's suicide while the U.S. K9 corps chased him into a hole in the ground.

(Now that he is dead, make that Bag Deady.)

So much for the media's stories about ISIS rising because we are withdrawing from Syria.

Maybe Jeff Bezos can give his eulogy.

Islamic State leader Abu Bakr al-Baghdadi transformed himself from a little-known teacher of Koranic recitation into the self-proclaimed ruler of an entity that covered swaths of Syria and Iraq https://t.co/CNI5XBsoai
— Bloomberg Politics (@bpolitics) October 27, 2019

Bag Deady was a fiend who raped teenage girls and pulled out their fingernails. Democrats are shocked that President Trump was glad to see him die.

BREAKING: Speaking this morning on CBS "Face the Nation," Obama's Jt Chiefs Vice Chair James Winnefeld bashed Trump for "piling humiliation" on ISIS after lethal raid on its kingpin:"If you look back at the bin Laden raid, we treated his body with respect that is due under Islam" pic.twitter.com/qUavXsHYOl
— Paul Sperry (@paulsperry_) October 27, 2019

The same party that denied the President of the United States the peaceful transition he deserves now demands that we respect a terrorist.

Democrats also were upset because President Donald John Trump didn't tell them in advance so they could have tipped off Bag Deady.

Retweet if you think it's hilarious that Trump told the Russians he was going to go after al-Baghdadi but not Nancy Pelosi because he couldn't trust her.
— Bill Mitchell (@mitchellvii) October 27, 2019

Russia can be trusted because it no longer is communist.

The rest of Fox News played it straight.

The New York Times tried to expose our nation's secrets, which jeopardizes the lives of people the Times said would be wiped out by genocide.

The jobs brought back are grave digging.

Timing is everything in comedy, further proof that SNL isn't comedy.

The bizarre reaction to the death of the world's top terrorist caught Democrats flat-footed. Without talking points to regurgitate, the media was on its own. Instead of celebrating the death of an evil man, the media called him an austere religious scholar. Orange Man Bad, therefore anyone who hates Orange Man is good. What a joyless lot.

Media aside, it's a nice day for a white funeral.

ITEM 2:  Bearing Arms reported, "The Trump White House is quietly reaching out to Second Amendment organizations and high-level supporters to let them know that the president is no longer backing any form of red flag firearms legislation or changes to the current background check laws, according to sources familiar with the conversations.

"According to one individual who spoke to Bearing Arms on the condition of anonymity, the White House is instead looking to focus efforts on mental health, and is “looking at something along the lines of Cornyn’s bill”, a reference to Sen. John Cornyn’s RESPONSE Act unveiled this week. The source was careful to point out, however, that the White House has not endorsed the Cornyn proposal, and may not be on board with all of the provisions."

I told readers on August 15 this would happen.

I wrote, "Following the shooting in Dayton and El Paso, President Donald John Trump engaged the push for more gun control. His enemies, such as Matt Drudge, thought they had him in a read-my-lips moment. They gobbled the bait.

"I looked at it and saw the immigration reform of 2017. Same players, different topic. They want Donald Trump to sell us out.

"The wall rises slowly. The Donald is patient. So am I."

Now then, when have I been wrong?

ITEM 3: Fox News reported, "Rep. Katie Hill, D-Calif., announced her resignation Sunday after a string of reports shining a negative light on her personal life, including a reported affair with her legislative director that sparked a House Ethics Committee investigation.

"Hill tweeted on Sunday evening, 'It is with a broken heart that today I announce my resignation from Congress. This is the hardest thing I have ever had to do, but I believe it is the best thing for my constituents, my community, and our country.' She is expected to step down by the end of this week.

"The congresswoman last week had fought back against reports of an affair with the congressional staffer, as well as reports she was in a so-called throuple relationship with husband Kenny Heslep and a campaign staffer."

You'll have to have yourself pulled out after the Savoy Throuple.

I predicted this on Friday, but it happened much sooner than I thought. Red State did a good exposing her, as it were.

ITEM 4: Loren Grush wrote, "On Friday, NASA celebrated a monumental first in its 61 years of history: a spacewalk performed by two women astronauts — without any men suited up alongside them. While it was a much-lauded step for the agency, the milestone also left many wondering why it took so long."

I am glad she asked that because men as usual had to trailblaze the way into space. That is the way it works. Men are stronger and braver. All the explorers -- Columbus, Marco Polo, Ferdinand Magellan, James Cook, etc. -- were men not because of sexism, but because that is what men do.

There was never any question that we would put a man on the moon because that is the role of men. They took the chances and they have made space safe enough for women.

Yes, Russians had women cosmonauts. They also have not put a man (or a woman) on the moon. You can do social engineering or you can do actual engineering. You cannot do both.

The story said, "More than 30 letters were recently written to the city opposing the project, and protesters packed one gallery of the Milwaukee Common Council chamber during a recent city meeting.

"Then, on Oct. 18, Milwaukee Ald. Kahlif Rainey reversed his position and said he now opposes the plan by Strauss. In a statement issued late afternoon that day Rainey, whose district includes the possible Strauss headquarters property, said he could no longer support the project after it had drawn the opposition of a group that called it a slaughterhouse and 'the most egregious type of business to bring into a residential area.' He said he had heard an 'overwhelming response from neighbors in opposition to the project."

"The Strauss facility was expected to receive about 500 live cows daily to be butchered and packaged. The company had plans to move about 150 Strauss jobs to Milwaukee from Franklin, and house up to 500 workers long term. The jobs would pay $14 to $17 an hour."

If you ban the slaughterhouse, then no beef for you.

The story was a column by Giancarlo Sopo, a public relations strategist and a 2019 National Review Institute regional fellow in Dallas. NR. It figures. Once again a Never Trumper pretends to be conservative -- and fails. The president's supporters are Americans first. They are too busy making America great again for these word games.

Any president who is impeached and acquitted should be permitted to serve a third term, writes William Mattox https://t.co/1nNkJF0GoY
— WSJ Editorial Page (@WSJopinion) October 24, 2019

ITEM 8: Breitbart Politics reported, "Former Vice President Joe Biden inaccurately claimed on Saturday to have received his start at a historically black college or university, despite never having attended such an institution.

"Biden, who has history of exaggerating his civil rights involvement, made the claim during a campaign town hall in South Carolina, while talking about his plan for education."

ITEM 9: The New York Post reported, "New York City generously shares its homeless crisis with every corner of America. From the tropical shores of Honolulu and Puerto Rico, to the badlands of Utah and backwaters of Louisiana, the Big Apple has sent local homeless families to 373 cities across the country with a full year of rent in their pockets as part of Mayor Bill de Blasio’s Special One-Time Assistance Program."

This is the best thing de Blasio has done since he killed that groundhog. 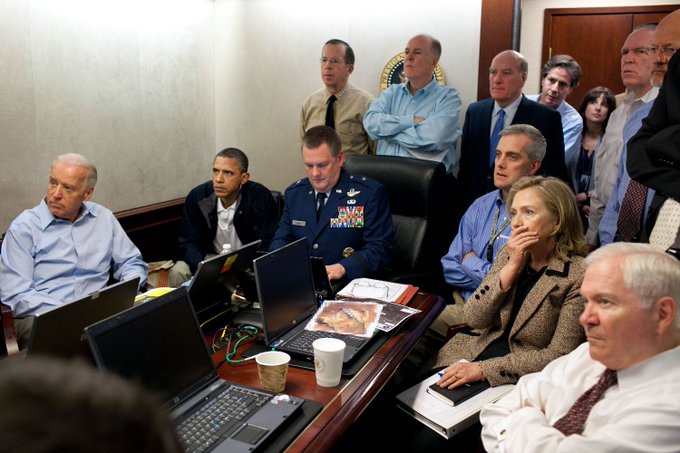 I want to personally congratulate President Obama and the men women of the Armed Forces for a job very well (cont) http://tl.gd/a7dhom
— Donald J. Trump (@realDonaldTrump) May 2, 2011

Donald Trump said, "I want to personally congratulate President Obama and the men [and] women of the Armed Forces for a job very well done. I am so proud to see Americans standing shoulder to shoulder, waving the American flag in celebration of this great victory.

"We should spend the next several days not debating party politics, but in remembrance of those who lost their lives on 9/11 and those fighting for our freedom. God Bless America."

ITEM 11: A reader wrote, "I heard from a friend through messenger that he tried to post your blog on FB about the 3rd anniversary of Hillary’s failed win. He received a msg that stated what he was about to post violated community standards. Just thought you should know."

The Facebook community is liberal San Francisco where people poop in the streets. The government gives away needles for heroin users but bans plastic straws.

Zuckerberg is a wimp. His money cannot buy him the testosterone he needs.

Abu Bakr al Baghdadi was an evil man and a terrorist, who terrorized the world with violence and a message of hate.

The world is a safer place without him.

We have deep gratitude for the brave men and women who carried out this dangerous operation.
— Ilhan Omar (@IlhanMN) October 27, 2019

ITEM 13: Via Ryan Saavedra, Economist Editor-in-Chief Zanny Minton Beddoes said of Elizabeth Warren on MSNBC, "About 50% of the stock market and private equity companies would be affected by her re-regulation, by break up, by some of, one of her many very big, ambitious proposals, and I think it’s not just that there are individual policies that one can disagree with, and there are many.

"And the converse of that is that I think she’s driven by a real punitive dislike of much of business, and that is actually some of the underpinning of American prosperity – much of that underpinning. American capitalism is strong because of its business."

Hmm, CNN is pushing Warren. Fox News is pushing Gabbard. UT-1 in Ukraine is pushing Biden. I wonder who MSNBC is pushing -- the Gay Mayor or HRC?

It' looks like @donsurber will have to add nationals fans to his Trump list https://t.co/9FsMsuXcpJ
— Peter Ingemi (@DaTechGuyblog) October 28, 2019