President Trump has the Marxists treed. Having undone the worst of Obama's communist "environmental" regulations, President Trump is about to dismantle the welfare state -- using the very method that Obama did to recreate it after welfare reform. 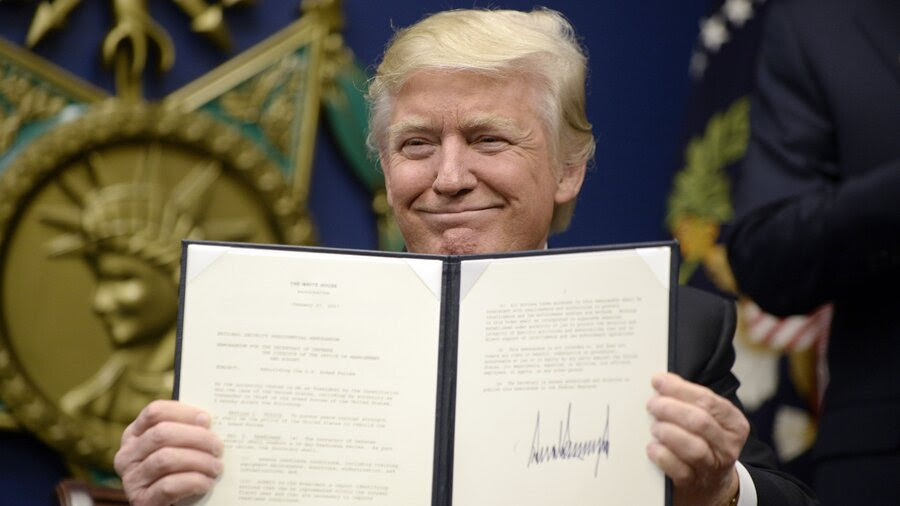 Oh yes, Obama was stealth in changing the regulations to undo welfare reform without Congress.

Trump -- a man who was smart enough to turn a few million into a $10 billion empire -- will rebuild it without Congress.

And Congress will let him because it is a body of cowards too afraid to do anything lest they lose their jobs.


Trump administration officials are mulling an executive order that would instruct federal agencies to review low-income assistance programs, part of a coming effort to make sweeping changes to the country’s welfare system.

The White House began circulating a draft order to federal agencies for comment last week, according to two administration officials, who were granted anonymity to discuss the internal deliberations.

One of the officials said the draft order calls on agencies to review existing regulations and propose new rules that conform to a set of broad welfare principles, including tighter work requirements that encourage recipients to shift back into the labor force.

The order also calls for streamlining or eliminating duplicative services and establishing metrics for holding agencies accountable for program performance. It also encourages greater cooperation with state and local governments.

The initiative comes as President Donald Trump shifts attention to his ambitious tax reform initiative in the wake of his failed effort to repeal Obamacare. Administration backers of the welfare executive order hope he signs it before Thanksgiving, one of the officials said.

This is very preliminary. We shall see how it goes.

But President Trump has figured something out. He thought Tom Price and Republican leaders had a plan to replace and repeal Obamacare.

That is why he did not hesitate to cashier Dr. Price over his lifestyles-of-the-rich-and-famous travels. Price became a swamp critter. Sad.

Getting Congress to change the law is like getting a baby to change his diaper.

President Trump, though, is using the powers of the president to get things done that need to be done. He does not have time to play congressional games.

Please enjoy my books on how the press bungled the 2016 election.

Caution: Readers occasionally may laugh out loud at the media as they read this account of Trump's election.

Caution: Readers occasionally may laugh out loud at the media as they read this account of Trump's nomination.